I started this blog to highlight the work of Africans who are providing new or alternative perspectives about the continent. But I also started it to support the Stephen Lewis Foundation’s A Dare To Remember Campaign, which assists communities in Sub-Saharan Africa dealing with HIV/AIDS.
AIDS is not an “African” issue – it’s a global one. Nor is it the only health issue facing Africans. But HIV/AIDS is part of the picture for all too many people.
December 1 is World AIDS Day. So I’m going to write today's and tomorrow's posts about people who are dealing with the challenges of HIV and AIDS in their daily lives.
In yesterday’s post I referred to the value of listening to the stories of communities. Stories are important: they help us imagine ourselves in someone else’s place. Stories allow us to glimpse each other’s realities. That’s the first step in understanding not only how other people’s lives are different, but how they are similar to our own.
Here’s one story: that of Maria Mhlongo, a grandmother in .

Pius Adesanmi, a Nigerian writer and academic who has written about the idea of “” (and who I'll feature in an upcoming post), commented to me that some things that we think of as “African” are on closer look, human qualities.
Some people reflect those shared qualities. I want to mention in particular the "Kilimanjaro Grannies." They are six Canadian grandmothers living in and around who climbed in 2007 to raise money for HIV/AIDS. The climb was the idea of Gisele Lalonde Mansfield, who decided to climb in memory of her brother Michel who died of AIDS in 1995. She heard two African grandmothers interviewed on AM and contacted the Stephen Lewis Foundation to offer support.
was joined on the adventure by Liza Badham, Trudy Stephen, Tina Cuerrier, Barbara Carriere and Janet Carrière. Together they’ve raised $84,000 for the Stephen Lewis Foundation’s Grandmothers to Grandmothers Campaign. They’re also raising funds to build a camp in for people living with HIV and AIDS, and their families. The Kilimanjaro Grannies have written a book about their experience, called Kilimanjaro: A Purposeful Journey. More information is available at www.kiligrannies.com. 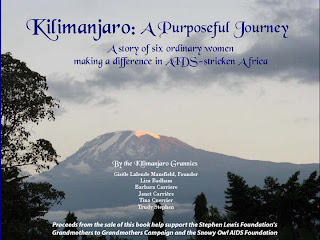 AIDS is a global issue, and caring and supporting are univeral traits.
Posted by Denise at 11:17 PM

About A Dare To Discover

This blog features the work of African writers, scholars, teachers, commentators and artists whose perspectives can enrich and challenge our perceptions.

I started this blog after coming across the Stephen Lewis Foundation's A Dare to Remember Campaign, which seeks to "turn the tide" of HIV/AIDS in Sub-Saharan Africa. The Dare Campaign got me thinking about how seldom we outside Africa hear African voices. I "dared" myself to create this blog and do a post on one such voice each day for a month. I still add posts from time to time.